I would like to consider myself a pretty brave person. So … I’m going to be ballsy and kick off this long-awaited film blog with an honest review of what is hotly regarded as ‘The Greatest film of all time’, or so IMDb (the film God) seems to think so… The Shawshank Redemption. 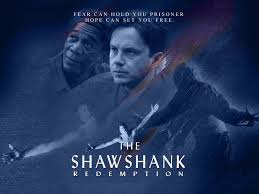 The Basic Plot centres on Andy Dufresne, a young banker sent to prison for the murder of his adulterous wife. Whilst at Shawshank prison he meets Red (Morgan Freeman), the story follows these two men, alongside a few other inmates, as they struggle through prison woes and form a lifetime bond.

So… what do I think?

Well I’ll start by saying straight away, that I think it’s good, pretty good… but certainly not OH MY DAYS AMAZING LET ME SEE IT AGAIN NOW PLEASE… If you get me?

To be fair, it would probably be a push for me to ever watch it again. Been there, done it, bought the t-shirt… that kind of thing.

There’s some good characterisation, very believable relationships and a strong sense of brotherhood throughout. There are also a few heart-wrenching moments that left even me close to a tear-stopping gulp (a difficult feat). But the whole thing seems ever so long (142 mins) and is sort of predictable for the most part.

The trouble with these kinds of films is the preceding hype that surrounds them. It’s impossible to give an honest critique when you’re expecting ‘God’s gift to film’ beforehand.

Have a watch if you haven’t already (I highly doubt it, just about everyone has) and see what you think.

I bet you won’t love it or hate it… it’s not Marmite, it’s just an ordinary plain digestive that you dip in a hot brew… nothing special, but worth trying because it’s there.